By far the most popular god of Norse Mythology is Thor, the thunder god. But what does one envision when his name is mentioned? For most people it is the image of a tall, powerfully-built blond with a hammer in his hand and wearing a Marvel-ous super hero costume. Of course this hints at the truth and is certainly enjoyable, but the true image of the Thunderer is markedly different.

If you were able to ask an ancient, pre-Christian, Germanic pagan to describe Thor you would learn that his luscious golden locks are actually a head of wild, fiery red hair befitting of a storm god who wields such a weapon as lightening that is as hot as the sun. It is a worthy descriptor because red has always been the color of energy, power, potency and strength.

Thor is also huge in stature to match the greatness of the giants he is ever in battle with in defense of Asgard, the home of the gods. He is the thorn that protects the rose. Even the rune bearing his energy and his name, Thurisaz, is a thorn on a branch, as seen in the image to the right.

The rune also represents the beloved hammer, Mjolnir (pronounced mee-yole-neer), that is always at Thor’s side and always hits its intended target and returns to his hand. One throw is said to level mountains. 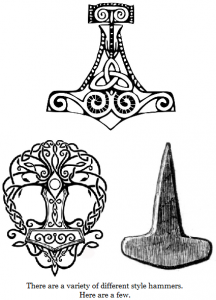 Thor doesn’t travel alone. His goats Tanngrisnir (Teeth Bearer) and Tanngnjostr (Teeth Grinder) pull him along in a chariot or sleigh, giving birth to the notion that Thor is the origin of Santa Claus and Father Christmas; though that is a hotly debated topic. Each night, Thor cooks and eats his goats and resurrects them with his hammer in the morning. The hammer Mjolnir is, above all else, a symbol of life. It is the symbol of Thor always defending life against its threats like the giants that represent the winter cold that must be beaten back by the sun every spring. Like the hammer, the sun brings life. Even the infamous swastika, misused by Hitler, is an ancient symbol of luck and life and is literally the image of Thor’s hammer flying through the sky as if thrown by the Thunderer himself. Vikings often wore hammer necklaces for luck and would use them to bless people and places or even a meal by holding it aloft and reciting a prayer.

Thor is the warrior and protector of the gods. He is the god of strength and life. His energy is the underlying, all-pervading energy that keeps everything alive. This makes sense because, while his father is the airy, sky-god Odin, his mother is Jord, the personification of the earth. What lies between earth and sky? Thunder and Lightening. Thor the Thunderer.

Sit comfortably and breathe deeply. Pay attention to your breathing. Inhale for a count of 5 and exhale the same. Imagine where your body makes contact with the earth while you’re sitting is a bonding point. You are literally bonding yourself to the earth. Feel the heavy stability beneath you. Feel the connectivity of all the earth’s creatures also touching the ground. Packs of wolves and herds of deer, you are connected to them all. When you are ready, point your mind skyward. Imagine your thoughts are of the air, wind and clouds. Feel the lightness and ease with which you reach upward. Feel the gusts that form the wind, holding all the flying creatures in the sky and pushing clouds into their shapes.

When you feel comfortably planted on the earth beneath you and strongly attached to the sky above, place your mind’s eye in between the two. This is where the earth and sky meet and form the sacred union of the trinity that is a constant in all belief systems. The union of sky father and mother earth forms Thor, an admixture of the two. This is the realm of hard and soft, light and heavy and its visual manifestation is the flash of lightening. It’s music is thunder. This is the realm of power. This is the place where the storm is born and the fire of creativity is available. This is the place that allows you to form your ideas and solidify them to your will, so you can manifest them in your life. Imagine the powerful Thor holding his hammer high with lightening arcing all around you. Feel the cracking thunder and the electricity in the air and know that whatever you will to happen, will happen.

You are now with Thor, the master of sky and earth. What is he saying to you? What is the look on his face? What is he doing? Stay with him for a while. When you are ready, let the storm ease and slow to a rumble. Take several deep breaths and slowly come away from the storm. Make note of everything that happens with pen and paper so you can look at it anytime.

May Thor bless you